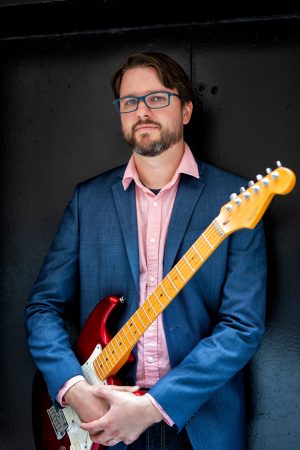 The music of composer and multi-instrumentalist Dan VanHassel (b. 1981) has been described as “energizing” (Wall Street Journal), “a refreshing direction” (I Care If You Listen.com), and “an imaginative and rewarding soundscape” (San Francisco Classical Voice). His works create a uniquely evocative sound world drawing from a background in rock, Indonesian gamelan, free improvisation, and classical music. His piece for chamber ensemble and electronics Ghost in the Machine, performed by the Talea Ensemble at the MATA Festival in New York City, has been praised as “something of a masterpiece…this piece needs to be heard, seen, talked about, and learned from” (New Classic LA). fzzl for snare drum and live electronics, featured at the International Computer Music Conference in Perth, Australia, was called a “magnificently-crafted composition…VanHassel has created a consistently fresh and surprising dialogue between the live performer and the electronically induced sound” (Lontano Music).

His music has been recognized by grants from Chamber Music America, The Barlow Endowment, The Johnstone Fund for New Music, The Boston Foundation, and New Music USA. He has received honors and awards from ASCAP, New England Conservatory, UC Berkeley, Carnegie Mellon, the Guerrilla Composers Guild, and the Kalamazoo New Music Project.

Recent performances of note include the world premiere at the 2018 Gaudeamus Festival in Utrecht of his saxophone quartet Schizoid Devices, performed by the Keuris Quartet, and the world premiere of Fracture for vibraphone and electronics at the Boston New Music Festival in October 2018, commissioned by percussionist Joseph Van Hassel, with support from a Live Arts Boston grant.

Recordings of his music appear on Transient Canvas’s recent album Wired, released on New Focus Recordings, Ablaze Amidst the Horns, the debut album from Ignition Duo featuring Reverie for two electric guitars, and Music from SEAMUS, Vol. 25 featuring fzzl. His music can also be heard on releases from the Soundset, Perishable, and Thinking OutLoud labels.

Also active as a concert producer and electric guitarist, Dan currently leads the Boston-based contemporary quartet Hinge. He was also a founding member of contemporary chamber ensemble Wild Rumpus in San Francisco and artistic director through 2016. Cited as a “fresh young ensemble” by the Wall Street Journal and “a showcase of virtuosity and imagination” by San Francisco Classical Voice, Wild Rumpus has commissioned and performed over 30 new works by young and emerging composers.

Currently residing in Boston, Dan has degrees from UC Berkeley, New England Conservatory, and Carnegie Mellon University. He has studied composition with Edmund Campion, John Mallia, Leonardo Balada, and Nancy Galbraith. He has taught composition and electronic music at MIT, Brandeis University, Connecticut College, Clark University, and UC Berkeley, and is currently on faculty at the Boston Conservatory at Berklee.