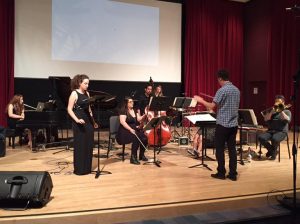 Program Note:
This 25 minute work for soprano and ensemble tells the story of an intergalactic salesperson on a mission to the planet Ammonia in order to sell a remarkably powerful cleaning solution. While attempting to do her best at this rather mundane job, our protagonist is simultaneously experiencing an internal spiritual and moral crisis. This inner turmoil is reflected musically with wild and noisy material and fragmented, percussive vocalizations while the main narrative is sung using a more traditional melodic and harmonic idiom.

The primary text was written by songwriter and artist Jesse Rimler, with additional fragments extracted from Super Bowl TV commercials and leaked U.S. government documents, including the Bush administration memo justifying the use of torture and the Obama administration memo justifying the assassination by the government of American citizens living abroad.

The work is in seven movements played without break. They are as follows: